Latin American Masters is pleased to present …for they shall inherit the earth, an exhibition of new paintings by Arnaldo Roche (Puerto Rico, b.1955). The exhibition includes six large scale works, combining figuration and still-life motifs, and eight small-format works that take self-portraiture as a jumping off point for exploring themes of personal loss and the search for identity. The psychological complexity of Roche’s art is matched by the formal power of his painting, whose highly tactile and densly layered surfaces both hide and reveal meaning. 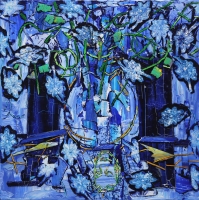 Arnaldo Roche
Back To Top