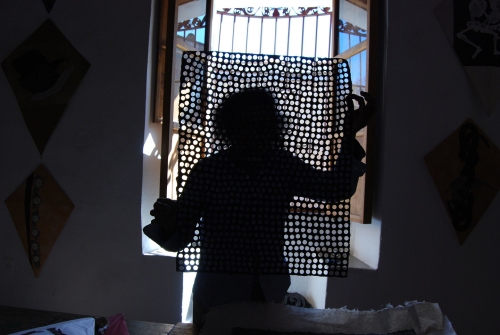 Despite the legends put forth by art dealers and political figures alike that tried to depict him as a representative of some sort of original ethnic authenticity, Francisco Toledo, who died on September 5, 2019, in Oaxaca, Mexico, always stressed that the formative years of his childhood took place in a state of cultural exile. Francisco Benjamin López Toledo was born to a family from Juchitán, on the Isthmus of Tehuantepec in southern Mexico. Owing to the town’s political turbulence and the father’s job as a salesman, they ended up migrating to Minatitlán in the Gulf of Veracruz. In fact, Toledo himself was “accidentally” born in Mexico City when his mother was just passing through. That distance, however, would become one of the focal points of the artist’s life and work, evidenced in the way his entire oeuvre points to the reinvention of an imagined homeland.

After playing around with a camera and learning to paint and etch with Arturo García Bustos at the National Institute of Fine Arts, Toledo traveled to Paris in 1960. His images, brimming with eroticism, and his inexhaustible, mythological imagination, which incorporated natural elements and indigenous stories, opened his eyes to the practitioners of a declining surrealism: Octavio Paz, the poet André Pieyre de Mandiarges, and—completing an explosive quadrangle—the poet and painter Bona Tibertelli. Although still quite young, Toledo fit in perfectly with a cultural milieu that, not entirely free of exoticism, was eager to incorporate non-European artists. Near the end of that decade, Toledo returned to Mexico, this time to his father’s hometown, Juchitán, in order to recreate—or, rather, reinvent—a culture he barely knew. It was there that he found the student movement diaspora, which led to his meeting a young activist, the poet Elisa Ramírez, with whom he would come to found the Juchitán House of Culture in 1972. It would be the first of many institutions the painter founded and financed with the proceeds from his art—the beginning of a pattern in which Toledo would redirect the power and prestige stemming from his fame towards constructing spaces for cultural enjoyment and social memory in Oaxaca. His activism, aimed at rescuing the Isthmus Zapotec culture and linking it with other cultures from around the world, coincided with the rise of multiple grassroots movements throughout Mexico. The House of Culture connected with the Coalition of Workers, Peasants, and Students of the Isthmus in Juchitán, making it the first municipality governed by a communist organization. Toledo would come to personally and physically experience the violence and repression that leftists faced during that first brush with electoral power.

Toledo’s commitment to Juchitán and the Coalition of Workers, Peasants, and Students of the Isthmus coincided with his radicalization as an artist. His living knowledge of Zapotec culture would become entangled with an upwardly spiraling sense of artistic and literary learning: Toledo united the brutality of Dubuffet’s spaces with the humor of Posada’s engravings, made the colorful patterns of Oceanian art dance with the childlike imagination of Paul Klee, and harnessed the graphics of Alfred Kubin or James Ensor to reflect on pre-Columbian mythology. His ability to approach the prose of Borges and Kafka using tropical imagery, and to envision the sexuality of reptiles as being a lost genre of the classical fable, would come to constitute an imaginary that refuted the supposed identity of Amerindian art in order to reinvent it. His artistic powers expanded when, in addition to paintings, drawings, and prints, he took it upon himself to produce a multitude of assemblages and other objects. This kind of work combined his animistic imagination with botanical and animal remains in an eroticism no longer of mere images but of all kinds of materials and bodies. These powers became especially noticeable in his retrospective at the Museum of Modern Art in Mexico City in 1980, which catapulted him to the position of new standard-bearer for art in Mexico, a position Toledo would maintain until his death, despite the various revolutions in which Latin American art played a prominent role over the last forty years.

In Mexico, his imagination constituted the magical trick of creating an unlikely mix: his art was an alternative that challenged the European orientation of artists of the so-called “Rupture,” as well as the unaesthetic values of 1970s political art, using delirious textures and forms unprecedented in regional modern art. His status as a topic of popular obsession was also based on proclaiming a utopia of liberated sexuality: Toledo’s work celebrates vaginas and phalluses, as well as mythological animals and talking furniture, all the while suggesting the way in which animism is the essential component of every story, the retelling of a transformation. His work certainly escaped the intellectualist limitations of conceptual art, as well as the neurotic confusion stirred up by much of the art that sought to lend expression to underdevelopment. As one of his primary critics, the Guatemalan poet Luis Cardoza y Aragón wrote, “Toledo cannot be captured by reason alone.” Indeed, appreciating his images requires of us a burst of laughter, along with a feverishness recognizable as having come from the tropics. Toledo is a southern artist who distilled all kinds of standards and traditions into a localized art.

After a new, more productive stay in Europe, Toledo invested his earnings in the creation of one of the Mexican subcontinent’s most significant collections of graphic art, leading him to eventually found, in 1988, the Institute for Graphic Arts of Oaxaca (IAGO), the mother ship of an entire fleet of cultural institutions and libraries, which themselves transformed Oaxaca from a marginalized city into an authentic cultural capital. The other institutions founded by Toledo include two libraries (one for the sighted and one for the blind), a museum of contemporary art, a photography center, and the San Augustín Etla Arts Center, which occupied a disused nineteenth-century manufacturing complex that sat in an ideal location. Even at the cost of cutting his productivity as a painter during the 1990s, Toledo dedicated himself to turning each of these institutions into a small utopia, not only in terms of their content, but also in terms of the incomparable beauty of these spaces, which served the public at large. This gesture was a true act of political-cultural alchemy; Toledo rejected the banality of occupying the predestined throne of artist-king of the nation, and instead redefined the role of the activist to include securing access to culture, defending native heritage, and raising awareness of nature’s fragility. Toledo also became the touchstone of so-called “civil society” in Mexico: that hybrid group of recognizable figures and everyday citizens who mobilize as a last resort whenever the government of unbridled capitalism commits an act of aggression against nature, destroys the residue of memory, or condemns to extinction this or that species, this or that cultural form, this or that important historical space. Toledo’s activism famously managed to prevent McDonald’s from opening a franchise on the main plaza in Oaxaca, sought to save the hills surrounding the city, and introduced all sorts of struggles for social justice and human rights into the public consciousness. Similar to artists in other countries with a tyrannical or cynical political class, Toledo served as a sort of alternative moral authority in Mexico: the conscience of society, the defender of ways of life that would otherwise be eradicated in favor of reckless modernity.

Toledo would sometimes interrupt his incessant and overwhelming public activity—through which he became the minister of a parallel culture—to produce waves of new art, including photographs of phallic performances, and stained-glass windows with delirious and fantastic colors made out of craft paper, cement tiles, pressed felt, and natural mica. These works were all intended to resuscitate various artforms in decline, and to finance Toledo’s other cultural operations. Contrary to generalized rules and expectations, Francisco Toledo’s later work was not at all melancholic or introverted; rather, it proclaimed a passion for life and the world itself. More recently, Toledo had vigorously protested the indifference to the widespread violence plaguing Mexico through extraordinary clay funeral urns and kites on which the images of the disappeared were imprinted. In these works, expressiveness depends on an almost magical domain of materiality: surfaces and light simultaneously evoke the iridescence of night, the depth of minerals, and the shadows of moving animals.

For more than three decades Francisco Toledo was the reference point for a cultural practice that invented common space as a form of ethical expression. Mexico in particular, and the Global South in general, have lost a multifaceted artist, one of inexhaustible depths. In today’s Mexico, no one knows who will continue to protect the causes that Francisco defended. The danger that the beauty he created in his cultural institutions will be lost is a ghost that haunts our nightmares with an oppressive sense of dread. The possibility that Francisco Toledo will become the victim of all sorts of tributes—something that he hated with a militant passion—is all but inevitable. Still, in Mexico the people have a right to mourn him: unlike politicians and ideologues, Francisco Toledo was one of the few Mexicans of whom it can be said that they brought goodness to society. His departure impoverishes this already depleted century.

Translated from the Spanish by Ezra E. Fitz.