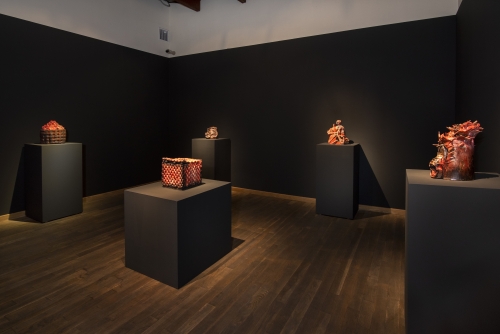 By Carolina A. Miranda

When an exhibition of works by Francisco Toledo opened at Mexico City’s Museo de Arte Moderno in the fall of 2015, it was momentous.

For one, it was the first exhibition in 35 years at the museum by the famed Oaxacan painter, who is known for infusing 20th century Modernism with indigenous tradition. It was also an unusual showcase of ceramic works for an artist better known as a painter. What’s more, the work represented a compelling statement against Mexico’s spiraling violence — and the role that government corruption has played in it.

“Duelo,” as the exhibition was called, was inspired by the disappearance of 43 students from a rural teachers college in Ayotzinapa in 2014. The show, whose title means “Mourning,” was a funereal collection of ceramic urns, decayed heads and disconcerting arrangements of body parts — all crafted in a way that seemed to evoke the color and texture of flayed skin.

“With everything that one hears in the news, in the newspapers, little by little this pushed me to do an exhibit on the theme of violence,” Toledo, who died in September at the age of 79, told Times Mexico City bureau chief Patrick J. McDonnell of the events that inspired the show. “And red [colors] that I had never used began to appear, colors of blood.”

After its exhibition in Mexico City, the show traveled to his home state. Toledo didn’t expect that it would be seen again because of the difficulty of transporting ceramics.

“It is coming to Oaxaca,” he told the Mexican daily El Universal in 2016, “and I think there it will die.”

I’m happy to say that his prediction did not come true. Pieces from that historic show are now on view in an ongoing exhibition at Latin American Masters in Santa Monica.

“Francisco Toledo: Fire and Earth” brings together a small selection of works from “Duelo” with other ceramics produced by the artist late in his career (often in collaboration with master ceramist Claudio Jerónimo López of the Centro de las Artes de San Agustín in Oaxaca). And the gallery has given these works a display worthy of their theme.

Ceramics from “Duelo” inhabit a separate, darkened space that feels appropriately tomb-like. In the dim light, each object is individually lit, making the fleshy reds seem that much more visceral. (They were similarly displayed at the Museo de Arte Moderno in Mexico City when they went on view in 2015.)

The works — a skeleton clutching at a man’s head, a basket of ears — feel like a cry of indignation.

The disappearance of the 43 students affected the artist deeply, says Latin American Masters director William Sheehy. “These were young people, they were students. Francisco was a bibliophile who built schools — and these were students! This was just too much.”

"[Ayotzinapa] is going to remain like a stain on the history of Mexico, like the student massacre at Tlatelolco in 1968,” Toledo told journalist Karen Moe in 2017. “Year after year, it gets ... memorialized — and so will this.”

That stain is palpable in the work.

In one ceramic, a shoe is consumed by flame. In another, a human head rests in a vessel held together by rope — or are those worms? The surface of a ceramic plate is decorated with a skeleton that clutches at its own viscera. On darkened pedestals rest myriad urns.

“The urns,” says Sheehy, “he’s rhyming the idea of a high ceramic process with the burning of the body.”

With Toledo’s passing, the exhibition functions as another sort of memento mori.

“Art is grieving,” wrote Mexican President Andrés Manuel López Obrador on Twitter after the death of this important 20th century artist — his works are in the collection of New York’s Museum of Modern Art and the Los Angeles County Museum of Art. Three days of mourning took place in Oaxaca, where Toledo was known not just as a groundbreaking artist but as a figure who was deeply committed to fighting for historic preservation and maintenance of Mexico’s indigenous cultural legacies. (The artist had Zapotec roots.)

Toledo’s late-career ceramics displayed with the pieces from “Duelo” at Latin American Masters include some of the whimsical animals for which he was known: A pair of charming Xoloitzcuintli dogs greet visitors upon arrival; in another part of the gallery, a rabbit covered in copper leaf rests easily on a hammock that has been set on a sphere of black clay.

And there are the curious and often acerbic ways in which Toledo represents himself: as a butterfly pupa, a free-floating head and chained to a slave ship — the latter piece a nod to African ancestry whose existence was repressed in his family histories.

Toledo remained active as an artist, thinker and activist until the end. Sheehy says that he was discussing the prospect of doing a show of Toledo’s ceramics just a month before the artist’s death.

“We’re very honored to be doing this show,” Sheehy says. “It’s bittersweet. He is irreplaceable.”