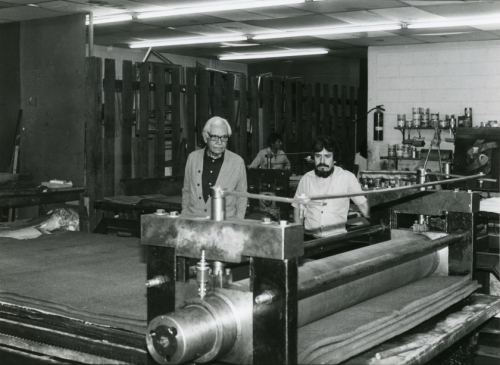 Rufino Tamayo in the Mixografia studio. “Dimensions of Form: Tamayo and Mixografia” is organized by the Bowers Museum in conjunction with Mixografia®. (Photograph by Shaye Remba and provided courtesy of Mixografia®)

Rufino Tamayo was one of Mexico’s great artists of the 20th century. His name often comes up in art conversations right after los tres grandes, or “the three great ones,” muralists Diego Rivera, José Clemente Orozco and David Alfaro Siqueiros.

But Tamayo, who was born in 1899 and died in 1991, was not as overtly political as los tres grandes. He drew from his Zapotec Indian and European heritage, and his work was more figurative, simplistic and abstract. Critics and art historians say his work also had pre-Columbian and surrealistic influences.

Through Jan. 19, the Bowers Museum of Cultural Art is presenting “Dimensions of Form: Tamayo and Mixografía.” The exhibition features about 50 prints on loan from Los Angeles’ Mixografía studio, which helped the artist create one of his most important bodies of work.

In 1973, Luis Remba, who ran the print shop Taller de Gráfica Mexicana in Mexico City, invited the already well-known Tamayo to make some prints. Remba had experience churning out tax forms and other rote documents, but not extensive fine-art printing experience.

At first, Tamayo was not terribly interested. The artist challenged the printmaker to create prints that did something different, that offered texture and dimensionality.

Remba and his shop accepted the challenge, and actually created a brand new printmaking process for the aging artist, who was in his 70s. The result was a textured print with fine surface detail called Mixografía. The Rembas wound up renaming their print shop after this new medium.

“Within the same year, they were already creating prints that were fully covered with this new texture,” said Mark Bustamante, assistant curator of exhibitions and research at the Bowers. “It is such a unique process, because they were able to capture multiple colors and textures at the same time.”

The Bowers exhibition starts with the earliest collaborations between Tamayo and Remba, including “Tremulous Woman,” a 1974 lithograph that actually does not contain any Mixografía elements.

Pretty soon after that, however, we see the metamorphosis of their medium into expressive Mixografía prints, as if a butterfly had emerged from its cocoon, according to exhibit’s text panels.

The Tamayo show, curated by Bustamante with assistance from curatorial consultant Karen Cordero, an art historian based in Mexico City, continues along thematic and chronological sections. These include “Gesture and Pose,” “Mexican Icons,” “Race,” “Invitations,” “Dimensionality and Texture,” “Time and Space,” “Unrest” and “Collaborations: The Final Years.”

A middle section highlights Tamayo’s collaborations with Remba and his group of graphic artists and laborers. A video highlights the making of “Dos Personajes Atacados Por Perros,” a 1983 Mixografía mural that used the largest conventional lithographic stone in the world, at 103 by 63 inches, or about 5 tons.

The Bowers could not afford to spend $50,000 on transporting that stone from Mixografía’s downtown L.A. studio to Santa Ana, so it settled on the lithographic stone for “Dos Figuras” (1979), which still weighs in at 4.5 tons. The print of “Dos Figuras” is also on display.

A graphic chart explains the Mixografía process for visitors. Some works contain unusual textures and impressions from charred wood, corrugated cardboard or burlap. One striking piece, “Hombre en la Ventana” (1980), incorporates an interesting piece of plastic found on a street in Paris. Tamayo thought it looked like a window.

Another highlight of the exhibit is “Galaxia,” a 1977 Mixografía print on Arches paper that seems to capture the existential mystery of the galaxy and beyond.

“Tamayo began working in printmaking as early as the 1920s and explored almost every possible printing technique,” Cordero said via email. “The invention of Mixografía, in collaboration with the Remba workshop, responds to his interest in creating a new technique in which he could achieve and reproduce the three-dimensionality and experimental textural qualities that he had been exploring in both painting and sculpture in the 1960s and ‘70s.”

“We are always looking for exhibitions that are important to our own community,” said Peter Keller, president of the Bowers. “Because of the demographics of Santa Ana, we decided to make the museum free for all Santa Ana residents every Sunday. We had the impression the cost was a big barrier for a lot of people.”

Original Link
Back To Top